Media Lab
About the Media Lab Contact Us Digitization Services 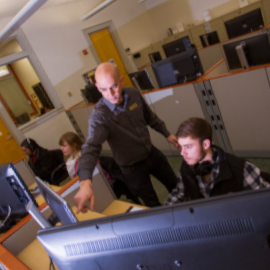 The lab has 18 networked PC workstations, and a state-of-the-art audio-visual projection system. The Control Room contains 2 PCs, a scanner, and a Media Tower that allows distribution of media to twelve student workstations with HD television monitors for film course reserves.

The Media Lab houses the library's recorded music collection of over 6000 audio titles primarily on CD and LP, including many rare recordings not available in digital format.  The library also hosts an impressive collection of streaming audio and digital music recordings such as the Naxos Music Library and Digital Theatre Plus.

Digitization Services
Request for digitization must be addressed to Lowell L. Lybarger, Media Librarian, by phone at (479) 964-0584 or email at llybarger@atu.edu.